It has been quite some time since this blog was first posted, so an update is well overdue! 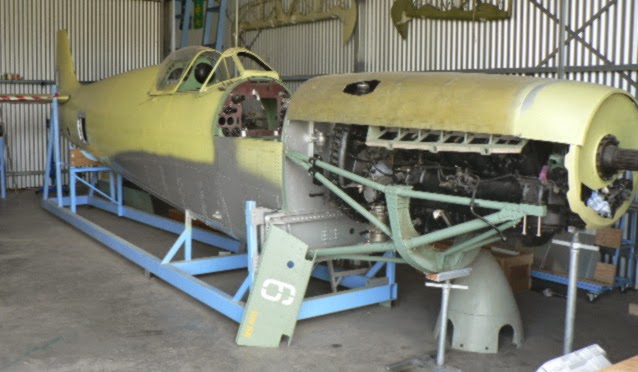 Over the last 18 months, the focus has mainly been on gathering and completing parts for the many aircraft systems.  Even over this relatively short period of time, original parts have become increasingly harder to locate, and a lot of effort has gone into fabricating replacement items. This means that although there has not been a great deal of visible progress, when the airframe is complete, the systems should be ready to install also. This should avoid the 80% complete- 80% to go scenario that is so often mentioned. 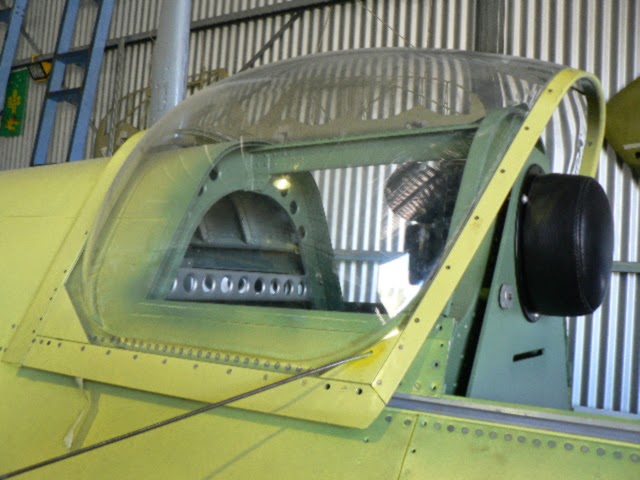 An overview of recent progress is as follows.

The canopy has been structurally completed. With the new bubble fitted into new frame components. An original butterfly release mechanism was sourced and reproduced, as well as components of the jettison mechanism. 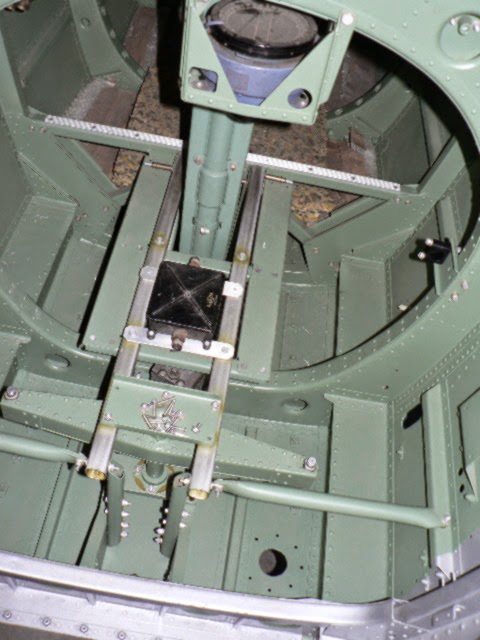 Work continues of aligning the windscreen assembly, and new Perspex is being cut and formed. 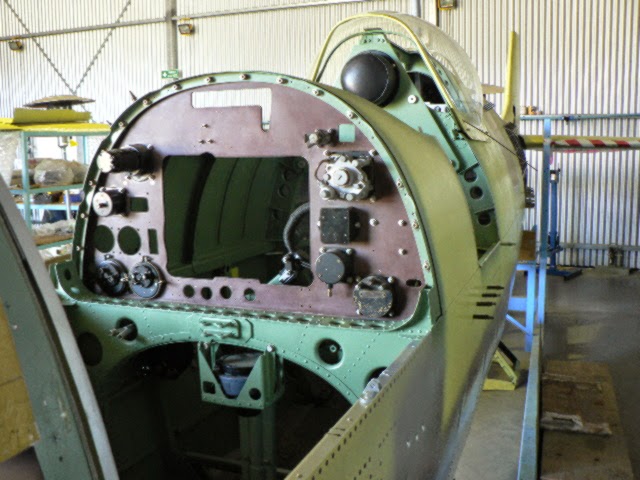 n the cockpit, a ventilator mechanism has been made, and fabrication and fitment of the many electrical component and system mount brackets has begun. Sourcing of the electrical system components continues. Most of the windscreen de-icer system components are on hand, including a new fluid tank and mount brackets. The supporting structure for the flight control components has been refurbished, with just a small amount of painting required. However, this structure will be left out of the aircraft, to allow installation of the multitude of pneumatic pipes in the surrounding area. 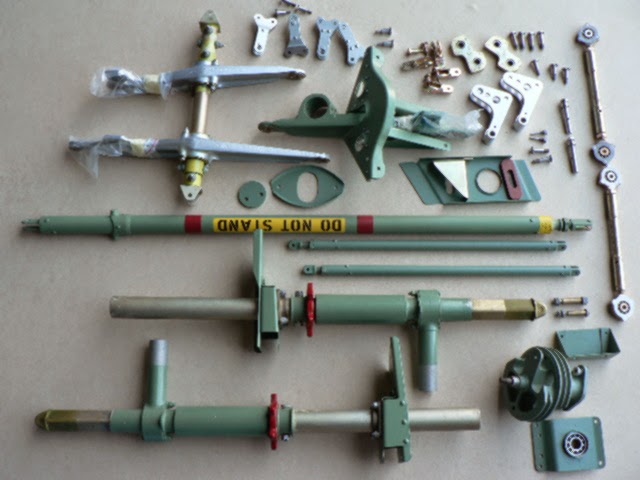 The flight control systems have received a lot of attention, with nearly all the required components on hand. Many of the components had received some form of attention prior to arrival in Scone. Unfortunately there was little in the way of accompanying paperwork, and to ensure that all were in good and serviceable condition beneath the layers of new paint, complete dismantling and detailed inspection was required. 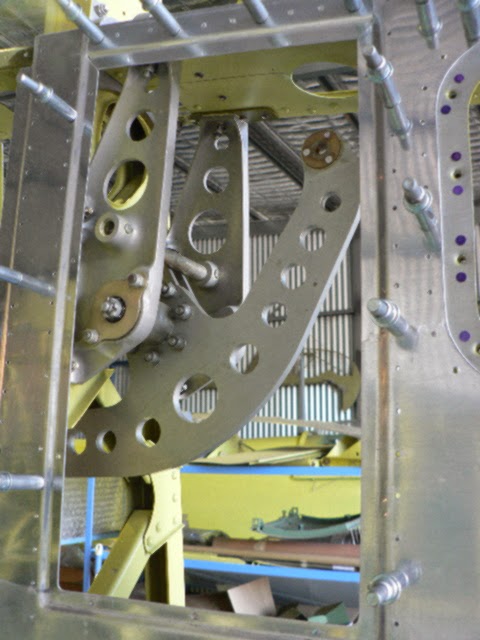 The rudder pedal adjuster assemblies are complete, except for the installation of the foot pedal castings – one of which is awaiting approval of a minor repair. 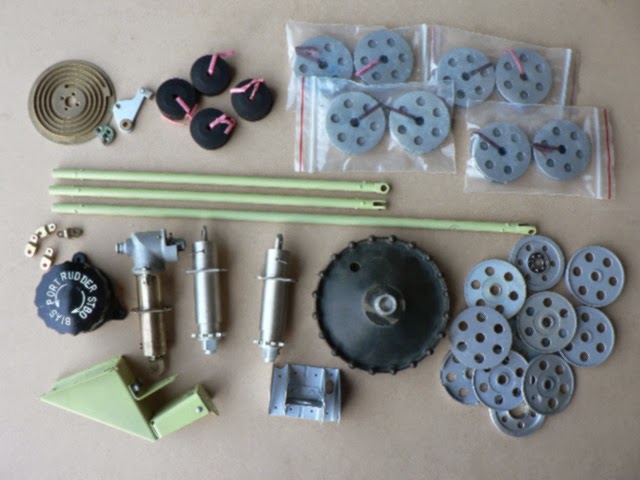 The refurbishment of the rudder and elevator trim components is well underway, with all the components except new chains now on hand. We were very pleased to finally be able to obtain the elusive ( until now )original elevator trim hand wheel unit.


Continuing with cockpit related parts – the shut-off and release mechanism components for the belly tank jettison system are now all on hand, and refurbishment of them is underway. 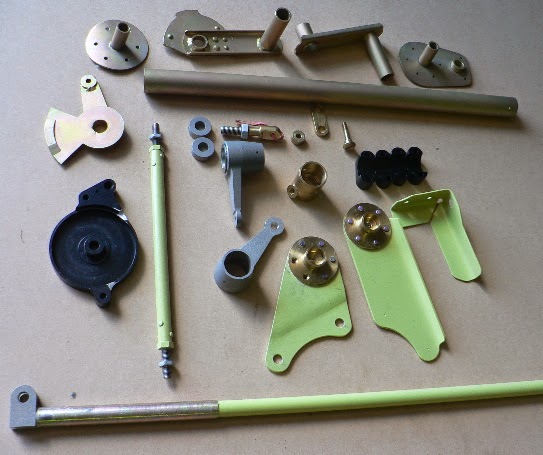 All the throttle control system parts are now on hand. Pushrods for the hand control, and boost control units have been made and assembled locally, and the throttle cross shaft and mount parts at the fuselage firewall have all been made, awaiting assembly.


The hand control unit for the carburettor air filter shutter has been made, including the special Morse lever housing. The mechanism for operating the shutter, which is mounted on the air intake duct, has also been made. 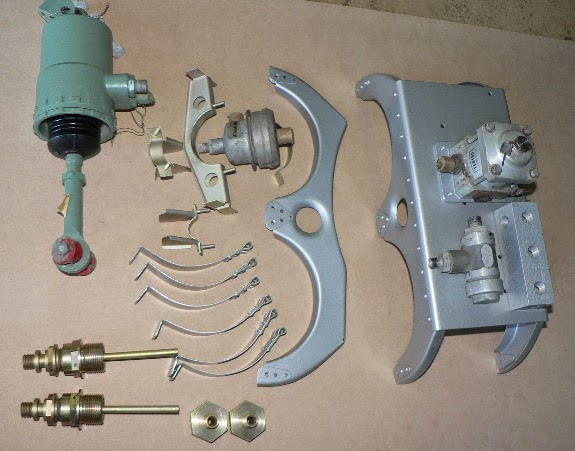 Aft of the cockpit resides the pneumatic system components. Several sets of air bottles have been sourced, and the special top and bottom fittings ( the lower items also double as the lower mount points for the bottles ) have been made locally. The upper mount brackets, pneumatic panel assembly and all the associated pneumatic components are now on hand.
All the components required for the installation of a static oxygen system are now on hand, and work continues on the various mounting brackets required. 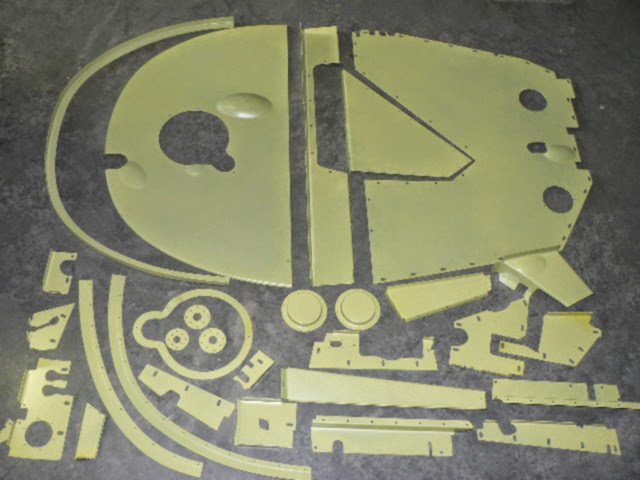 Immediately forward of the cockpit area, all the components for the fire baffle have been completed, and now on hand ready for installation. This will be done in conjunction with the lower fuel tank installation.


The lower fuel tank has now been structurally completed by Pioneer Aero, and all the various attaching plumbing fittings, elbows etc have been made locally.  The upper tank was received with the original project kit in a half complete state, This has now had the missing sheet metal parts and machined fittings made, including a new dipstick assembly as well as all the special plumbing connections.
Also, the parts required for the installation of a float valve for the wing fuel tanks transfer system have been made. 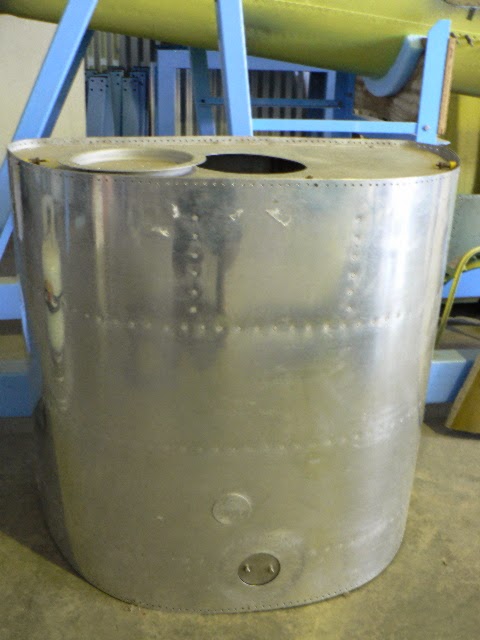 Regarding the landing gear system.  New retraction ram assemblies are now on hand, and all the components for the CO2 emergency blow down system have been sourced. However, the search for parts to complete the undercarriage selector in the cockpit continues. 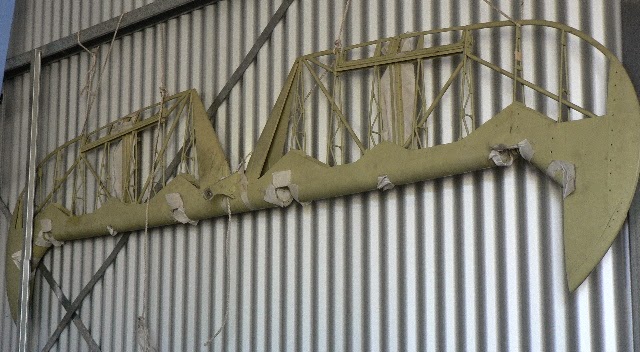 The NOS wheel hubs have had new brake drums fitted and line- machined, and complete NOS brake units, including the pneumatic bags, are on hand. 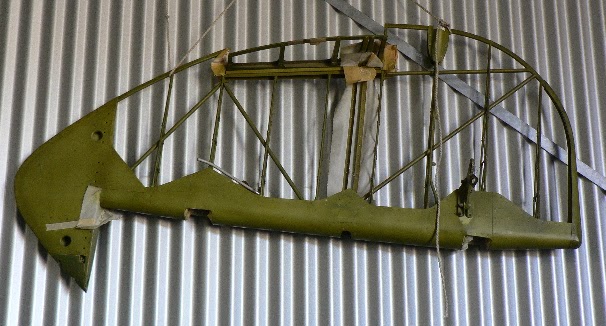 The rudder and elevator are on hand awaiting fabric covering, which will be carried out at a time closer to aircraft completion.

Moving to the “business end’ of the aircraft. The overhaul of the Merlin 70 engine is continuing in conjunction with another engine rebuild. The sourcing of the required replacement parts, and overhaul of others is ongoing. We have so far collected 10 of the required 12 exhaust stacks – the remaining 2 items continue to be elusive !


The propeller components are currently in England being inspected for suitability for overhaul. A set of 4 new Hoffmann propeller blades is also on hand. 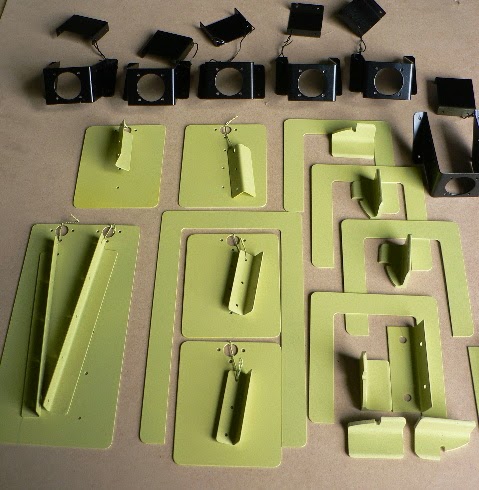 A complete original spinner assembly is waiting its turn for refurbishment. A new nose cone is on hand to be fitted.


The radiators for the engine coolant and oil cooling systems are currently being manufactured, with completion imminent. A full set of new copper pipes and most of the required seal and coupling parts are on hand.


A complete original large capacity oil tank is also on hand waiting to be rebuilt. 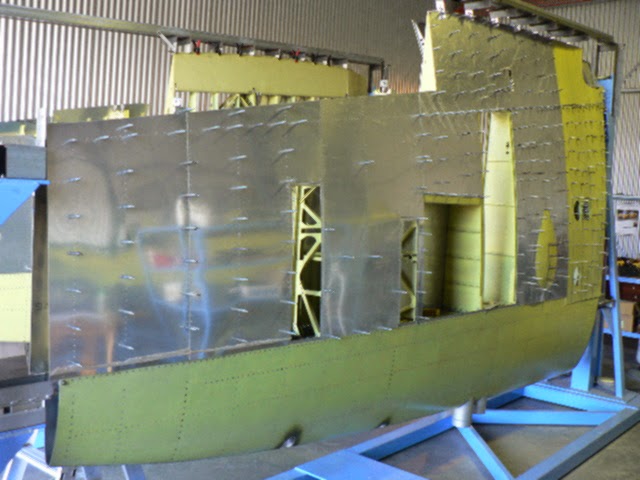 Showing more in the way of visual progress are the wings. A lot of effort has gone into the alignment and correct positioning of the wing flaps, and trailing edge area. At first glance, this area appears quite simple and straight forward, but everything had to be in an exact position for everything to work correctly and faultlessly. The wing skins, with their many joggled portions and rebates, are well underway, and work has also commenced on the assembly of the various access doors for the armament and flight control systems. The parts for all doors are on hand, including locally made catches and receptacles. 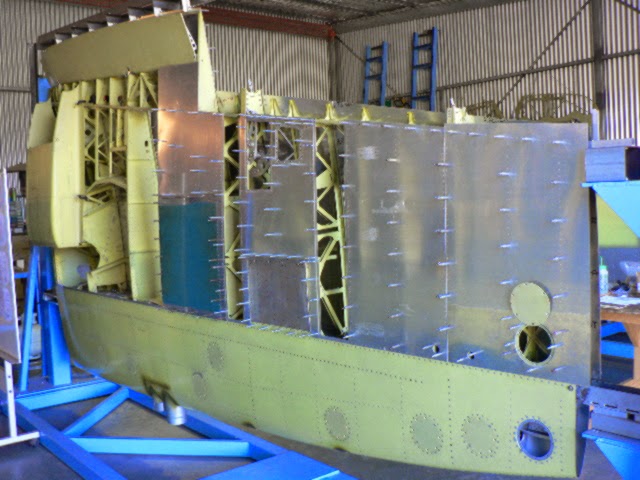 Work has also been carried out on reproducing the armament mounting parts, to allow the installation of replica guns if desired.  To enable this to happen, some of the wing ribs have required additional structural parts to be made. 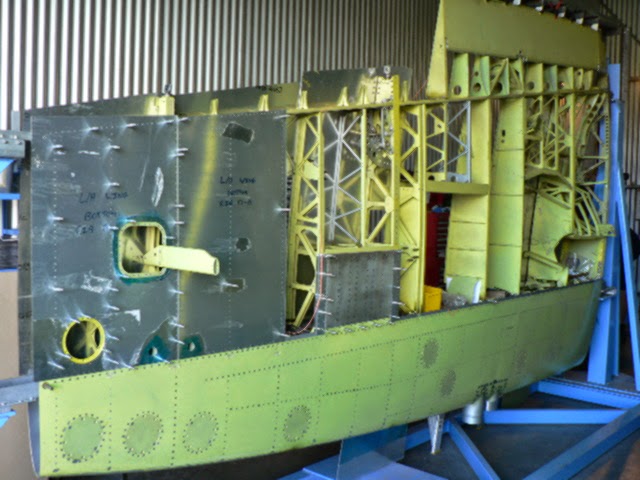 Also, minor changes to the wing structure are being incorporated to accommodate the wing fuel tanks in the cannon and ammunition bays, in accordance with the Spitfire TR9 variant . 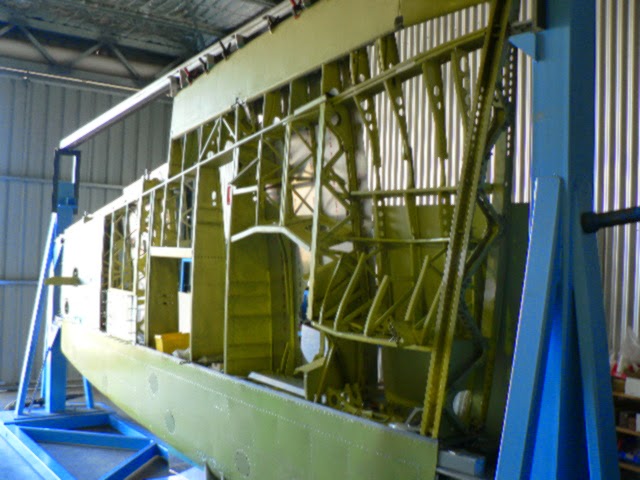 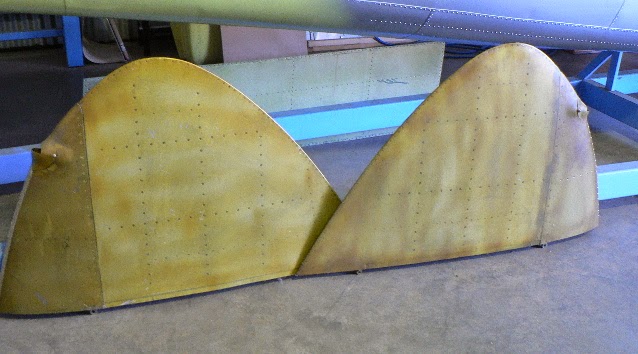 The wing tip assemblies are on hand, and these will be able to be fitted when the wings can be removed from their assembly fixtures in a few months time.


Finally, approximately half of the parts required for the wing to fuselage fairings are now on hand, with the remaining parts well underway.
More to follow shortly....
Posted by Pays Spitfire at 03:30 4 comments: